What Color Is My World?: The Lost History of African-American Inventors

Did you know that James West invented the microphone in your cell phone? That Fred Jones invented the refrigerated truck that makes supermarkets possible? Or that Dr. Percy Julian synthesized cortisone from soy, easing untold people’s pain? These are just some of the black inventors and innovators scoring big points in this dynamic look at several unsung heroes who shared a desire to improve people’s lives. Offering profiles with fast facts on flaps and framed by a funny contemporary story featuring two feisty twins, here is a nod to the minds behind the gamma electric cell and the ice-cream scoop, improvements to traffic lights, open-heart surgery, and more — inventors whose ingenuity and perseverance against great odds made our world safer, better, and brighter.
Back matter includes an authors’ note and sources.

Amazon Exclusive: A Q&A with Kareem Abdul-Jabbar on What Color is My World?

Question: When did you first become interested in learning about African-American inventors?

Abdul-Jabbar: I first became interested in African-American inventors when I wrote Black Profiles in Courage in 1996. During that time I was immersed in black history and the many courageous African-Americans that history books had overlooked. I was surprised at how many inventors that affected our everyday life had been left out of what we learned in school. I knew at that time that I would someday want to do something about that inequity.

Q: Super Soaker or Illusion Transmitter? Of the many inventions you talk about in the book, which is your favorite?

Abdul-Jabbar: My favorite invention in the book is the foil-electret microphone invented by James West because it has made cell phone communication possible. The cell phone has completely changed our world. Today’s kids can’t imagine a time before there were cell phones or iPods or iPads. But all that was possible, in part, thanks to one black man who had to struggle against great odds to achieve his dream. Those are the kind of men and women we should be exposing our children to.

Q: In What Color is My World? Herbie keeps a journal with him all the time–do you keep a journal?

Abdul-Jabbar: I don’t keep a journal, but I do tweet on Twitter and have a Facebook site, which are the modern equivalents. However, Herbie’s journal is the kind I would have kept and wish I had as a child. It’s filled with the sense of wonder he has about the world. I had that same sense of wonder but I was a little too restless to write it all down. I’m trying to make up for all that now with the books I write.

Q: What was your favorite class in school?

Abdul-Jabbar: I don’t think it will be any surprise that my favorite class was history. I’ve said many times that if I hadn’t become a professional basketball player, I would have become a history teacher. There’s so much to learn from history. The saying, “Those that don’t learn from history are condemned to repeat it” doesn’t just apply to politicians and world leaders, it applies to all of us on a daily basis. We can learn from mistakes of others, whether they’re kings or our parents. When we do learn those lessons, we’re better equipped to make our own dreams come true.

Q: What do you most want kids to know about you outside of your legendary basketball career?

Abdul-Jabbar: I love basketball, but playing basketball doesn’t fully define who I am. I was always a good student, too. Sure, I could have skated by as an athlete, but the world is so much bigger and more interesting than any one thing. I didn’t want to be pigeonholed as just a jock. I’m also an author, a student of history, and I collect memorabilia from the Wild West. I’m also a son, a father, and a friend.

Q: Did you read a lot as a kid? Did you have any favorite books growing up?

Abdul-Jabbar: I read a lot as a kid. Some of my favorite books were The Strange Case of Dr. Jekyll and Mr. Hyde by Robert Louis Stevenson, The Three Musketeers by Alexander Dumas and The Man Who Would Be King by Rudyard Kipling. Reading opened up the world like nothing else. One day I might be sword fighting in 17th Century France, the next I might be fighting off crazed assassins in 19th Century India. Video games just can’t compare with the variety and intensity of reading.

Q: What was it like to receive the Abraham Lincoln Medal [awarded to individuals who exemplify President Abraham Lincoln’s commitment to equality in their body of work, accomplishments or personal attributes] and meet the President and First Lady?

Abdul-Jabbar: It was a great honor, truly unforgettable. One of the great things about growing older is that you can see some of your childhood dreams about the world come true. When I was a kid I imagined a day when we would have an African-American president. I imagined a day when children of all races would play together without fear or prejudice. The world isn’t perfect, but we’re heading in the right direction and I just want to play my part in making this a better world. I hope my books are a step in that direction.

Q: Will you write more books for kids? If so, do you have an idea for the next one yet?

Abdul-Jabbar: I have so many ideas I’d like to tackle. There’s no shortage in my imagination. History is filled with so many amazing people and I would like to bring them to light so they can inspire all of us–young and old–to become the kind of people we want to be.

Be the first to review “What Color Is My World?: The Lost History of African-American Inventors” Cancel reply 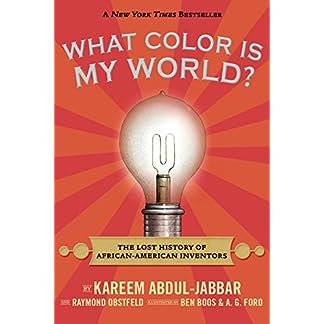